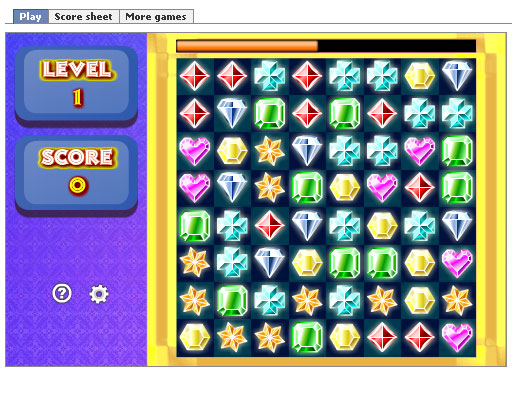 Gems Swap is that puzzle swapping game that we all have played at least once in our lives. At its start screen, Gems Swap gives you instructions on how to play the app. Essentially, your goal is to swap gems to create a line of three gems of the same type. When they line up sideways or long-ways they disappear. You cannot however swap gems that are lined up diagonally. There is a time limit; when it runs out, you lose and get your score. Lucky, Gems Swap shows your new score and previous score at the same time so you can see how much you improved or how worse you got. When you move up a level in Gems Swap your time limit decreases by half. Gems Swap is simple, fun, and addictive. Though Gems Swap is simple, or has a simple premise, you will still need to use your brain here. Often, time will be close to running out, and you will not be able to see any gems you can match together. However, matches are there because if they weren’t Gems Swap would say “No more matches” on the screen. You will need to use your brain, have a good and quick eye, and have a quick mouse. If you only have a quarter of a second left, you need to use your mouse to swap those gems quick so you can gain extra time. The more gems you swap and match, the more points you get and the more time you get. If you lose, don’t worry, there is no life count. You get to play as much as you want without waiting for a new life to reappear.

Gems Swap can be made better in a few ways. When you have lost a game, before you get your score it would be helpful if Gems Swap showed the matches you did not make. Gems Swap should highlight all the matches you could have made but were too slow to see before you ran out of time. It would also be interesting if there were special gems in Gems Swap; for example, a special gem that clears an entire line for you. Or you could collect a certain amount of special gems (collecting six diamonds in a row) and win a prize or mini game.

Though Gems Swap does not have special gems or mini games it stays true to being a simple gem swap puzzle game that will have you swapping gems in your sleep.