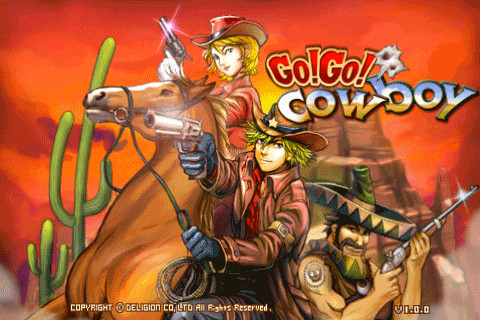 With many new gaming applications out there, it is hard to get noticed.  However, Gogo Cowboy was designed by a developer with ten years of experience.  As you can tell, the game is based on the wild west, which makes it quite unique.  Actually, it was one of the first western applications on the iPod and the iPad and it has just been released as the USA server.  If you have seen these types of movies, you know that there is always a duel or a showdown between two people. You can choose a friend and decide to duel with him/her instantly, giving you a realistic interface along with sweet graphics where you can shoot in first person.  The graphics look like the old Final Fantasy games for portable consoles, which definitely brings back memories. You can also practice your showdowns against a computer before showing off to your friends or foes.  You will definitely be playing this game for hours because you can meet other people from all around the world and interact with them.  You can also fight them and place them on a wanted list for the bounty hunters to claim revenge.  If the wanted are really tacky and have very bad reputation, you can choose to vote them out of the cowboy world, allowing people to exhibit their best behavior when playing in the west. The only assets you can buy on this game are simple guns and horses, which you could gain with experience and money from match winnings.  Many other applications just allow you to visit other players without even having a chat with them instantly.  Most users who rate this will definitely compliment on that feature as well as the originality of the game.  The best part about this game is that it is completely free to download and there are no limits to the things you obtain.  You don’t even have to use your money to buy power ups or unique items.  Most people despise to be defeated by others who use their own money to power up their character enough so that nobody can touch them or their things.  Feel free to download this free game, you won’t regret it!