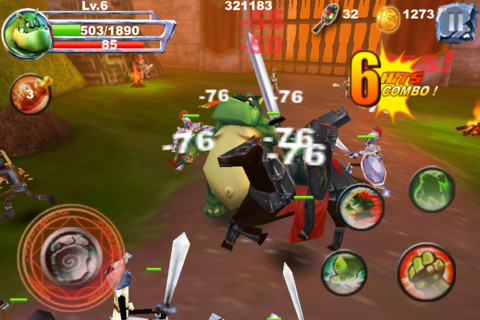 Tired of boring RPG’s for your iPod, iPhone or iPad?  Monster Fight Pro is one of those promising games that allow you to play a game that proves to be much different from the traditional RPG’s with soldiers and other classes.  With Monster Fight Pro, you play as a monster and the human beings are the enemy because they have stolen the monster offspring.  How do you fight against the humans?  The attack methods are simple and quick, which is just what a monster needs to defend himself against a human. The game has sweet 3Dish graphics in which you can transport yourself to that monster world.  The maps are extensive, providing you with enough space to run around and cause trouble to other people.  You can upgrade your skills as you gain experience in order to keep yourself strong and versatile against new types of attacks.  This game has the look of an iPod version of Kingdom Hearts because of their toon-like graphics and their combat mode as well.

Now the game is rated three stars by users and the possible reason for this may be that there are a few bugs in this game for a few of them.  Most of the recent reviews have given the game five stars though, so the game would definitely be worth the play.  One user even recommends this game because of the extensive and colorful maps.  The only thing he would suggest is to add weapons to the monsters which could be an implementation to a future update.  The monsters do have attack and combat options such as charge, combination attacks, rolling attacks, strike flying skills and mash, so it doesn’t mean that the game lacks in combat options. Now you can download Monster Fight Pro free of charge and, if you would like to download additional content, you are able to do so through the Itunes App Store.  One of the good things about the content available to buy is that you have various things to choose from.  You can choose lollipops, extend your Max Hp to 500, or even buy some gold to buy yourself some items in the game.  One of the great things about this application are the graphics, so try it out free.