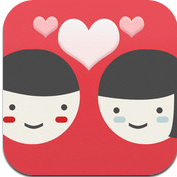 If you have a significant one or is avidly search for one, then SoulMate by Korean Developer Jinwoo Choi is a must have for you. It helps the two of you communicate seamlessly with just a touch of a button meaning you would not have to use the traditional methods of communication like emailing or messaging the other party; you could just use SoulMate to communicate to your other half. If you are someone who is very forgetful or just plain forget about your other half’s anniversary, then it is more reasons for you to obtain this very smart app, which would allow you to store the date of your anniversary. It can also store other essential things to keep your relationship going, like the scheduler where if you input the plans that you would have this coming weekend, it would directly sync to your partner’s SoulMate, allowing him or her to view whether you have a busy schedule ahead of you. Another great use for this application would be to store the photos that the 2 of you took together on your dates. The application would automatically store those photos in an album allowing the 2 of you to reminisce about the places the couple had visited before. The album is also shared between the two of you, meaning you can sync the photos in your phone to your sweetheart just by using SoulMate to perform the awesome function. If you are someone who would like to leave a note of any kind to your beloved one, the app also performs the fabulous function. It allows you to record down your voice or writing on the app, and it would automatically send that notification to your sweetheart, allowing him or her to be able to feel your love. There is also a shared diary where both of you could record the things that happened while the two of you are together and show them to your children next time. You can also upload your photos onto the great app in order to create a picture diary too. Another feature that I adore about this app would be the mini games where you could participate with your other half. It would help build rapport and love between the two of you together, prolonging the relationship. Another great feature about this app would be that it would help find singles around your area and mate the two of you together. You can also send a random love letter to another person using the app, allowing his or her day to be bright, knowing someone out there knows about his or her existence.

The User Interface is also very easy and smooth for anyone to use. It possesses a very clean background and the buttons and screen is very responsive to your touches which would most definitely allow you to use it smoothly. You can even customize the background of the Apple App, changing it to other colors whenever you like to.