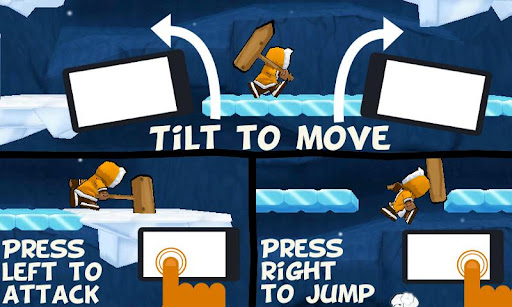 Icy Joe is a free game application designed by a team of enthusiastic developers in the year 2012 wherein the gamers can download the application to their android mobile device and can update it based on the compatibility with their devices. The game revolves around the character named Joe who explores various caves under a world of ice and often gets trapped with notorious animals and ice blocks. During his escapade, he falls in love with a pretty Eskimo girl. He explores several ways and means by which he could reach the sunny world. There are more than 50 levels in this game app and various achievements can be unlocked and the scores can be compared online with other Icy Joe gamers. Each level is filled with puzzles, bad mates, and constraints. The game app is compatible with android devices only, wherein the download would commence only after connecting an android device to a pc or making an order from an android device as such. It addresses security concerns like user identification by sending a message to the android user’s mobile number and seeks a confirmation to start gaming. People who are looking to play an old style adventure game but with the freshness of cool graphics, right in their Android devices, will surely enjoy helping Icy Joe find his way out from the claws of dangerous animals. Developed by “Art of bytes”, the game offers a mix of action, arcade, and adventure. The hero of the game is a cute little guy named Joe who accidentally falls in to a deep pit towered by ice on all sides. The player has to rescue Joe from the pit and help him find his way out. The game allows the player to control Joe and once you get him out, he can meet his pretty little Eskimo friend. Joe will be attacked by a number of animals and is blocked on all sides by huge ice cubes. Joe has a hammer which the player can control to break the ice cubes and kill the bad guys. The game has a simple and easy-to-use interface. The player has to simply tilt his or her Android device to make Joe move in a particular direction. The right side control helps Joe jump while the left side control activates the big hammer to break ice cubes or hit animals. By using the Jump button wisely, you can help Joe slide to bounce upwards. You can break the huge blocks of ice by using hammer button to grab the ice block and then tilt your device in the direction you wish to proceed. While you are helping Joe find light, you can collect valuable items on the way to gain additional points. You will face a number of icy creatures and poisonous animals inside the cave and you can use the additional points you gain for some extra power action. Every time you kill an animal, you gain extra points too. Before the life points drain, you have to reach the destination.

Icy Joe is a simple yet refreshing adventure game for the Android enthusiasts. The simple interface and controls combined with cool graphics and interesting levels make it a must try for all Android owners.