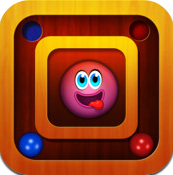 Are you looking for challenging ipad game ? Are you crazy about labyrinth type of game? Then it would be right choice. Hill Stone Animation Studios, ios app developers has released new free ipad game called “Candy Ball”. The name itself simply states that you are going to play with balls. It is a type of labyrinth game. I really dont know, how many of you remember the wooden board labyrinth game. You can refer google to read more about labyrinth game. Candy ball is a free ipad game with the concept of labyrinth. Developers have made it purposely to kill the boring time. At starting of the game play, you ll be getting a colorless balls from ball generator. Ball generator is like a hole which generates balls to play on the game space given on your ipad. Gamer needs to move that colorless balls to center of the game space to make it color and pocket that colored balls into same color of holes on the given game space.. You ll be getting colored balls by the ball generator in later stages of the game, also no. of balls count will be increased  to make your game play as much as difficult. Of course, that difficulty makes you more involved with the game play. Tricky part of the candy ball ipad game is that you need to protect your balls from falling down on the black holes. Yes, you will have to cross more black hold on the way to your destination on the ipad.  Twice I used to pocket my green color ball into black hole and I lost my life of the game in that stage. When levels getting higher, developers adds more challenging concept to safe your ball. Like you need to safe you moving color ball from fire, moving circle, rotating knife and more. Really fun playing and thrilling experience it is. Upcoming levels of the game play will not let you move from you chair, definitely you ll be sitting on the chair until you finish it.

The game brings you 20 challenging game levels and each levels provides you 3 stages to cross. You ll be getting 5 lifes for each stage. You need to cross the stage before you loss that 5 lifes, if you loss all the five life you cant move to successive levels of the games. But  you can buy a gold from the developer in Inapp purchase on the app store. There is also another provision to get free lifes, for that you need to send invitation to your social media friends on facebook. If they accepts your invitation, you will get few more life to play. Also you can share your score, successful level completion on facebook if you logged into your facebook account. Wonderful graphics and back ground screens are major plus points of the candy ball ipad game. Sound tracks acts as a catalyst to the players to encourage them. With all these positive points, H.S.A developers is offering candy ball game as free version to download on apple store. Unfortunately ipad users can only use this app, Expecting the developers soon release it for iphone too. Enjoy your week and kill your boring time with colorful candy ball game.