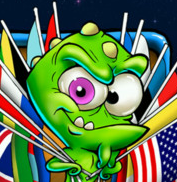 Whenever you think about aliens, you think about something bad, like an invasion or attack on Earth. However, Aliens Abducted is far from that. Created by Bilu Games, it is an educational game testing your knowledge about planet Earth like each country’s flag, population and capital city. You play as aliens, namely Moe, Barry and Marvin, who are challenged to solve and conquer each country’s knowledge and facts. This game is absolutely great for children who are still growing up and learning about the world. The cute aliens will definitely appeal to those of a younger age and there is a library which is a treasure trove of information to help them learn more about Earth and eventually win this game. The learning curve is not steep at all with easy instructions at first. Just choose the country’s flag which you think corresponds to the area that is highlighted by the application. This initial mode will have 32 levels, meaning you will need some time before finishing it. Even after that, there will be “Flags Free” mode where you will need to guess all the countries of the world with only three lives. This will definitely add to the difficulty and inspire those thinking juices in the brain. Even after those 2 incredibly difficult game modes, there will still be another platform game for you to complete, giving the buyer of the app his bang for the buck with many hours of game play. You will play as Moe (one of the aliens) as he escapes the compound with enemies coming his way from the right. I guarantee much fun for your children with this platform game. Another aspect of this game which I feel is worth mentioning is the 100 famous quotes from famous people like Winston Churchill or Eleanor Roosevelt. This will inspire the children of the next generation and can motivate people every day to spur them on.

Another useful feature is that you are able to take full use of the social media in this game. You can post your high scores onto social media websites like Twitter or FaceBook so that you and your friends can compete against each other for the best scores around. However this game also has its disadvantages. For example, the Flag Free Mode, which only gives you 3 chances, is not too forgiving and will demoralize any child when they lose. I understand that the game wishes to introduce a more competitive edge to the game but kids may not be able to take it. Another thing which I do not like about the game is the slow loading of the Wikipedia page for each country. The Wikipedia icon will redirect you to the country’s Wikipedia page; but at a snail’s pace.