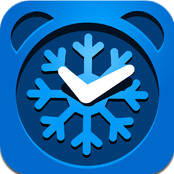 It’s difficult to get up early in the morning. Whether you had a lovely working day or not, the sleep must be sweet and complete sufficient enough to calm down your body from all the physical and mental anxieties you faced during the day. And when it’s the winter season right on your doorstep, it becomes an impossible task to resist that warmth of your blanket in a cold morning. Your body begins to shiver as soon as you are open to the atmosphere and even a bath of hot water isn’t enough to take you out of that bed. But we have something for you that’ll help you sleeping and wake you up at the right time along with some Christmas carols whispered in your ears. Let’s head to this one. Smart Alarm Clock is the new iOS app that has been developed by Arawella Corporation. The app is compatible iPhone, iPod touch and iPad and requires iOS 4.3 or later version. The app has also been optimized for iPhone 5. As the name suggests, it is an alarm clock but a smart one. It not only wakes you up or helps you to sleep (in case you face some problems), it also calculates your sleeping time and wakes you up at the right time which will work best for you. This is how it is being done. The app contains some natural music beats such as ocean’s tides, gentle rain and many more soothing sounds that will help you sleep easily. Then, there are 20 pre-installed tracks for the wake up alarm. But if you may want, you may select any one from your songs library as well. But if you want some more tracks from the developers, do check out the in-app purchases as there are many at affordable prices. On this Christmas season, the developers have a special offer that they are giving you 15 Christmas songs for free. It’s like a free Christmas album on iTunes. Other than the alarm, the app also records your sleeping hours. Therefore, it can tell you if you were snoring or not. That’s how the app calculates your sleeping cycle. It plots a graph based upon your noise and breathe levels and determines your daily sleep i.e. when you were deeply sleeping and when lightly. That’s how it tells you when to wake up, if the alarm time is nearly the same. But don’t expect the results to be completely correct. After all, it’s just an algorithm and has its own merits and demerits. But the results are still very much satisfactory. The app interface is better than most of the other similar apps; both in design and navigation. The tab navigation allows fast access to each corner of the app but restricts the fluidity.

The app is available for $0.99 in the App Store for now which is about 65% less than its regular price due to festival discount. Also, you are getting 15 songs for free. So, it’s not required to look back at the features. You already have your pockets full.