Americal Dream : A Trailer of Our Political System 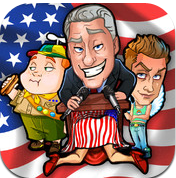 The way to success is not an easy one. It is often the dirty broken path with lots of riddles passing through the jungles of circumstances. You have to deal with them all and survive maintaining the constant pace. But it is not as honest as it sounds. There is lot of treacheries being woven against you and you have to indulge in between them because without becoming a part of it, you can’t resolve it neither can you hope for a miracle to happen when there are so many devils around. One of the perfect examples of the situation is the politics of your country. No matter where you live, the politicians are almost the same. It doesn’t matter if they are corrupted or not, the status of a politician is not everyone’s cake. So, whether you are interested or not, but if you get a chance to reach the position of the President of your country, won’t you take it? We have in our hands the new iOS app, American Dream that has been developed by 1337 LLC. The app is compatible with iPhone, iPod touch and iPad and requires iOS 5.0 or later version of the OS. The app revolves around you and the different stories you are a part of. The game actually measures your true intellectual level and how you can manipulate things to your own advantage. You will be taught that if you have to backstab someone to promote, do it. Though the message of the app is not much appreciable by the ideological persons, there are plenty of them in the app. You will meet different characters such as the judge, a fat boy, a well read intellectual personality and even the President himself. Each of them has a different story behind them. You have to judge them right and match them by three or more and evade successfully. The farther you reach, the more you earn. But if you are an amateur/ new in this business (as you enter the game as a scout, obviously not the perfect of starts for the President’s chair) and need someone to assist you a sharp and experienced soldier, then go to the in-app purchases and buy yourself an assistant. He will join hands with you and help you strategizing your plans. The graphics of the app are very interactive. The characters though are truly fictional, can be very easily related with many people around you bearing the same attitude and style. Though the app goes a little bit harsh when it comes to basics of teachings, it introduces us to the actual reality of the world around. We have seen many cute apps being promoted for children while a one like this gets demoralized for the content. But I would rather say that we should show the other side of the coin as well as far as there is no abusive or adult content. The app is available for free in the App Store. You would love to be a part of this one. It’s hilarious, cunning and real.