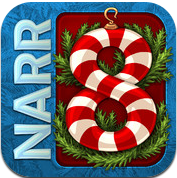 I’ve been a fan of television series and I have watched many including Game of Thrones, The Wire, Spartacus and The Prison Break. All of them are truly breathtaking and not less than a fast paced action movie. But these small screen episodes are in my opinion, better plotted and every character is being cast to the depth than the big Hollywood movies. And then there is a constant suspense and emotion that keeps you glued even when more than 5 seasons have been telecasted. But now these fantasy series are taking the shape from the mouse of graphic designers who are taking the comics back to the limelight with some modifications. You can find many digital comics on the web and they are well written as well as designed to capture your eyes from the first shot. Today, we have a similar experience for you on your iPad. NARR8 is the new iOS app that has been developed by NARR8 Limited. The app is compatible with iPad only and requires iOS 5.1 or later version. If it’s the first time you are going to be introduced with motion comics, then you’re going to be amazed with the quality of the content. You don’t find that kind of stuff everywhere, but the HD quality graphics and interesting stories won’t let you down. You can call it a free eBook platform or a comic stand where you can pick anyone, but you’ll be missing something. If you have watched the Harry Potter series, then the books or even photo frames often had moving images that were more likely videos. It’s exactly the same as NARR8 with a little difference that the videos are animated and you’re using an iPad for that.

When you first open up the store, you will find many different series lined up in different categories including Sci-fi, horror and world history. The series available for the moment are JAM, Paradigm, Multiverse, SPIN and many more. The episodes for each series are available for download and are uploaded regularly as all these series are running at the time. As you start reading a comic, you are subscribed to it automatically. The quality of the comics was amazing. There are digital plays with audios as well as texts depending upon the series you choose. The motion comics are just beautiful to watch with comic bubbles for the text. You get hooked with them right from the start till the stop button arrives for the end of the series. The plots are interesting as well as characters. All series are unique and different so you won’t find similar stuff while coming across two of them.

While reading a series, you can go to the next frame from the bottom right of the screen, go to the home screen or switch to any other episode from the contents table. You can also post your app activity on Facebook and Twitter. However, if you’re already connected then the app automatically shares all your activities and readings and prompts you to invite your friends to the app. This sometimes becomes irritating when you don’t want something posted and it is automatically. The app is available for free. This was as amusing to me as will be to anyone of you. All the present series are free of cost; even for download. But there are strong possibilities that most of the present/upcoming content will be tagged with a price. So, be fast to quickly get them all for free till the offer lasts out.