MonkeyOpopLite : The Captives are Waiting, Be Quick 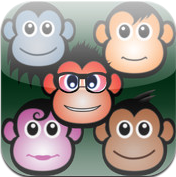 Thanks to the iTunes that we have so many new games and stuff surfacing to the home screen each and every moment in the App Store. While we are busy trying the latest games, developers are busy behind that screen looking for new ideas which can fit their equations. The idea may be a new mechanism, concept or something totally out of the box that no one ever imagined. There are some trendsetters and the rest are trend followers. Once again, we have an app here called MonkeyOpopLite. We won’t say it to be a trendsetter or follower because it is new but not something that would be copied by many others. So, let’s take at what it’s got in that short little package. MonkeyOpopLite has been recently released in App Store by Zilliar  who has some more games to his name that have been very well received. But will this one be the same kind of hit or fall down the stairs? Let’s find out.

The game revolves around a monkey and his tribe. While all the monkeys have been captured by the Lord Kong and kept in the dungeons of the Kong Castle in the Kong Island, only one has been left. Now, he is trying to enter the castle and save his friends and family. It’s obvious that the castle will be surrounded by King’s men and to reach the captives is not easy. The game consists of two modes: story and play. The play mode consists of about 27 levels out of which first few levels are unlocked for you. The rest will be unlocked when you when you clear them. There is a special Pop mode as well in which you have to tap as many monkeys as you can and score higher. The story mode progresses much steeper and I think is better than the play mode.

The gameplay of the app is a bit slow and simple. However, as the game proceeds you certainly find some interesting elements that make it much more interactive. But we must say that the graphics of the game are very polished and well designed. The app is compatible with iPad only and it shows off with the high quality background texture used in the app. The background sound of the app is also very nice and crispy and just as entertaining as the game. The app is available for free in the app store. It is compatible with iPad only and requires iOS 5.0 or later version. Other than the gaming elements, the game is integrated with social features such as you can share your scores on Facebook and Twitter as well. We recommend this app to everyone as it’s a fun game and entertaining as well. But apart from the well designed graphics, we doubt the actual gameplay.