Liquor Calculator : Never Get Caught Up in a “Mess” 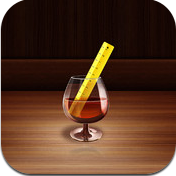 Alcohol – the word is enough to describe the addiction it carries with it. While some consider it to be the ‘heaven-on-earth’, sobers are happy to be not sharing their room with it. But no matter what someone says, the addicts are growing in number and alcohol is now a status symbol for parties. Everything goes fine until someone exceeds his limit and the chaos starts with some stupid behavior and funky attitude disliked by all. Thanks to your friends who serve as the “carriers” to drop you home fit and fine. But the very next day, you’re not even able to stand in front of your co-workers. A shameless act it was and all you can do is fell guilty. Let’s take a few steps backwards and go to the starting point. Now, add “Liquor Calculator” in the story and see the fate turning in the right direction. We are talking about the new iOS app, Liquor Calculator that has been developed by 1337 LLC. The app is compatible with iPhone, iPod touch and iPad and requires iOS 5.1 or later version on your device. Now, the app is not any alcoholic meter that measures your soberness when you’re drunk. So, you better don’t blow up your iPhone with that irritating smell. It rather collects all the data from you and then gives you detailed report about the duration of effect and drunkenness level. Let us show you how. When you launch the app, you’re greeted by a bar menu with over 30 drinks such as Vodka, Pilsner, Cosmopolitan, etc. But the app’s not a waiter to take orders from you. You have to select the drink you are about to take or already taken, set the alcohol content and volume of intake by sliding a meter and then enter the time of drink taken. Just as you are finished, the app will present to you a graph plotting your drunkenness level versus the time. So, you can easily find out the duration of drunkenness and your position anytime. The user interface is intuitive as well as beautiful with a beautifully carved out bar and drinks that look more appealing than the original one. You can easily set all the values and the app calculates everything for you. Moreover, you can use this app before and after intake. This way you can warn yourself of the possible consequences at a later stage. Also, the data given by the app is highly accurate. The app is available for $0.99. The app can only be downloaded if you’re 17 years of age or above and that’s obvious as teenagers are not allowed to drink anyway. So, they don’t need this app in their pocket. For adults, there is no cost to life and respect and that’s where the app comes handy. So, we will recommend to every drunker to have it in your phone. You don’t know when the party arrives!