ChessSetArt : Indulge In The History Of 25 Beautiful Chess Set 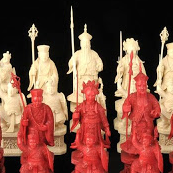 There are several apps in the play store that provides you the opportunity to play your favorite games on your device, but how many of them tell you the facts and exclusive things about the game? Not much right? If you are a brain game lover and you love to play or witness chess, it would be an interesting journey in the world of chess. The game has a long history and it was a game of kings. There has been a lot of modification in the game but the flavor and excitement of the game is still on. With numerous players finding new technique of the game, the chess boards has also changed, and that beautiful history is unfolded in the ChessSetArt by Prairie Media Inc. ChessSetArt Prairie Media Inc is an art based app that tells you about the history of art involved in the game of chess. The app comprises of 25 best chess boards of the world made during the last three centuries, and they are some master pieces that you will appreciate for sure. The art value and the history of the chess boards are discussed in the beautifully made videos and the controls of the video are quite easy. The app may be a bit costly, but once you go through the videos you will feel that you have paid for what you have received. Summary: ChessSetArt is an informative and art based app made completely for the knowledge and entertainment for the chess lovers. Several secrets of the ancient game is unfolded in the app.

Good: The app is an informative one with rate findings and great pictures of the chess sets that you may not be able to take your eyes off.