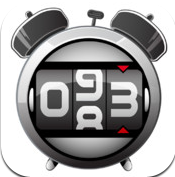 To be honest, most of us are very lazy, including me. Maybe that’s one of the biggest reasons that despite of knowing the last date coming near for the submission of the report, I always submit it the very next day of last. However, it’s also very often for me to forget completely about the project and all I end up is with some deep requests and regrets in front of my teachers. Maybe I can do nothing about the former cause other than changing myself; the latter do has a solution that will be very simple yet effective because I will have to change nothing but my clock that will be making me count every second that I’m wasting lying lazy in the bed. There are lots of customizable options made available by the developer while creating a new reminder. For example, now you can choose the units for the countdown i.e. seconds, minutes, days, etc as well as you can choose a unique icon for each of your reminders. Sound of alert is an obvious choice as in most other apps to be user dependent. This makes it easy for you to differentiate between them. There are some other features as well like you can set the alarm yearly in case the event repeats itself after one year as in case of birthdays and festivals. Also, you can create notes to be attached with these reminders. The UI of the app is intuitive and there is a kind of friendly feeling with the app that you immediately get used to it even if you have just opened it up for the first time. This takes it to the top of user’s choice. Also, the graphics of the app are crispy enough to attract a handy amount of users. And if I forgot to tell you, the app allows you to share your countdowns with your friends as well. It sounds funny on what would our friends do with our countdowns, but it will be useful in case of birthday of a common friend. You can share your reminders via Facebook, SMS, email, Twitter and Tumblr.