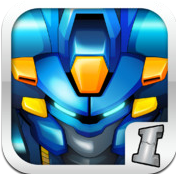 It’s been a while since Temple Run arrived in the App Store and right from the moment of its release; it grabbed the top spot and remained there for several weeks. It was the addicting gameplay and awesome graphics that grabbed a lot of attention. But no matter how good a game is, there is a lifetime of everything and now we want something else which is as good as Temple Run but different. So we were looking for a similar game and guess what we found. Our quest has finished with Iron Run. We are talking about the latest iOS app called Iron Run that has been developed by D2C. The app is compatible with iPhone, iPod touch and iPad and requires iOS 5.0 or later version of the OS. Now if you’ve never played Temple Run, let us first clear the concept for you. It’s plain and simple; you just have to run for your life. Just keep running and as long as you are away from the reach of the monster chasing you, you are alive and the game is on. While the concept is almost the same here as well, there are some minor differences. First, you are playing the character of a robot in a world ruled by computersand you are running because of some order by a rogue computer. But the story doesn’t bring a single change in the gameplay. You’re still running and the longer you survive, the more you score. But like Temple Run, there are many obstacles like unbreakable walls, pitfalls, etc. which block your path and you have to escape and save yourself using the same sweep controls as in the Temple Run. There are many power-ups as well like weapons but I guess that there is hardly any new feature that the developers can boast about. Though Iron Run has been released after Temple Run and is inspired from the same idea, still we would say that the graphics are not as good as we had expected. For example, take the character of the robot itself. The atmosphere is also very dull and a lot could have been involved if you’re talking about a world of computers in existence. The developer has tried to give it a transformer-like look but it looks pretty weird in actual. Also to make it more real, very irritating sounds have been used and therefore, the game needs many changes overall. The game is available for free in the App Store. We think that the creative quotient is missing from this app and it seems like the developer has pasted the same drawing on a different paper. Of course there are many new things to try but they are not sufficient to bring out a new game to the store. We would be expecting some new features to be introduced in the next upgrades.