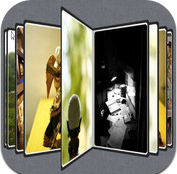 Clicking photos is fun and it is always exciting to catch some memories and place it in your storage device forever. But arranging these photos and finding them back isn’t as easy a task as you’d wish. Just imagine a thousand of photos and if even one is misplaced, then you don’t even know where to find it because it has a name more difficult to spell than the magic spells of Harry Potter. So there should be a tool that will sort out all your images according to a specific criterion so that you don’t have to roam around foolishly and end with nothing. One such tool is promised with this new app that we’re going to review next. Let’s find out how it goes to deal with it. I am talking about the new iOS app called PepperGallery that has been developed by MarkelSoft. The app is compatible with iPhone, iPod touch and iPad and requires iOS 6.0 or later version of the OS. The app has also been optimized for iPhone 5. The app is a photo organizer that deals with all the issues that you don’t want to deal with. There are so many feature in this app that it is not restricted to just organizing your photo gallery for you. You can modify your photos, edit them and share them with your friends from within the app.Everything is at your fingertips and you just have to tap it. It sorts out all the images according to the date when they are being clicked. Then you can search for them either from old to new or vice versa. You can also create albums and name them as you wish, just as in Facebook.  Talking about the cool effects, the exact value goes up to 43 effects and 14 filters. The different effects are Avatar, Dawn Effect, Napa, Yellow Noir, etc. You can also apply custom filters if you’re not happy with the available options. The layout of the app is good and I was impressed with the colour combinations used for the outlook. You don’t get bored unlike other photo editing apps with dull layout and it’s only your bright picture that decorates the desert with its Oasis. You can readily share your photos from within the app on major social networking websites such as Facebook, Twitter, Tumblr, Flickr, etc. The UI is also very simple and it’s difficult almost to nothing getting used to it. The app is available for free in the App Store. It just adds one more excuse to your list to download it right now. But the app is very traditional in many ways. It does change out the concept of sorting out the images but then this date concept has already been outdated and used in many other apps. Though not all, but some of the effects were really cool and new to the stage. Overall, I liked this app and would like you all to try it at least once.

Cons: traditional in many ways.