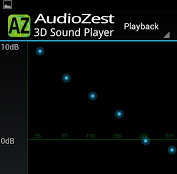 Who doesn’t like listening to music? In fact, music is the greatest gift that we could ever get as an evidence of the existence of soul on this earth. When you’re listening to music, you’re no longer on your own. Music connects you to the soul of the universe and me being a real big fan of R&B as well as Hip-Hop, I know what it means. So when you’re listening to your favourite tracks, you don’t want anyone disturbing you and any compromise on the quality of the tracks is just not acceptable. Sony’s Walkman and Apple’s iPod are considered the milestones in this genre. They offer both quality and compactness so that you can take your music with you wherever you want. But nowadays the same quality is available in Smartphones, so why not to try one of those? Though Smartphones are never sold with music as the leading feature, but if we have apps like AudioZest 3D Music Player, then one can certainly place it as the Ace card. The app I’m talking about, AudioZest 3D Music Player has recently been released in the Play Store. It has been developed by Bit Cauldron and is compatible with all the devices running Android 3.0 or later version of the OS. It is available under the music & audio category. Though the title makes it obvious, let me clear it to you. The app is a music player with 3D surround sound enhancements. You might have heard a lot recently about it with many Smartphones having already introduced it as a pre-loaded feature. But I don’t think that their claims are so good. It’s nothing like 3D surround sound but more of a “different” sound than that we’re used to.

The app really takes the 3D sound quality to a whole new level. One of the main controls that you have is that you can place the speakers virtually at any point with respect to you from 0-360 degrees. You can also place the speakers over your top i.e. you can place them just anywhere around you like moving them on the surface of a hemisphere built around you. The player itself has all the different controls and features that you’d normally get from any other normal player. You can turn the 3D feature on/off as you wish. You can also manually change the settings of the equalizer with swipe controls. Though the app is really good, but still a price tag of $4.99 sounds a bit high. It’s not that the price is not fair with the quality and features, but most often there is a limit for a user beyond which it’s pretty rare that he/she would buy an app no matter how good it is. But still I would like to try this app as it’s really a great one and will bring a whole new experience to your music library.

Cons: price is a bit high.