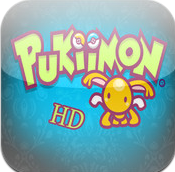 The love for Pokiimon and its characters was started more than a decade ago and it’s still popular among the kids. Kids are enchanted with those funny but yet powerful characters which are mostly represented as different forms of dinosaurs.  There has been thousands and thousands of new characters which has been portrayed in the games, movies, cartoons and much more to attract and entice the kids. Combining the entertaining factors of several successful games can surely increase the quality output of the combined game which is developed based on those factors. Pukiimon HD is one such entertaining app which has been developed and launched by the Ulrik Motzfeldt gaming company for the iPad users. The app requires iOS 5.0 or later versions of the software for its effective functioning. Pukiimon HD gaming app has adapted the concepts of two popular games which are Fruit Ninja and Veggie Samurai along with their own improvements and modifications with the Pokiimon character. If you are the champions in Fruit Ninja, this game tests your ability to collect the Pukiimon balls (slice through) for which you will be rewarded in the appropriate manner with different kinds of your favorite Pukiimon’s.  The players can download this game only after registering with the iTunes with their proper details along with the credit card information. Users can also create an account without their credit card details by skipping the option during the registration process. Players can progress through the different stages and levels in this game by travelling through the world of Pukiimon. The users will advance each step by jumping on to the next star in the map as and when they complete each stage. Players have to slice through the Pukiimon balls and collect their Pukiimon awards in their room at each stage. There are more than 20 Pukiimon awards waiting for the players who excel in their slicing skills. Become the ultimate champion by gathering all your trophies in this fun filled and action packed Pukiimon game. Players can also learn about the interesting facts of each of the Pukiimon that they have collected throughout their arduous journey. You have to be careful while slicing the Pukiimon balls and use strategies and are on high alert at all times by which you will avoid the dangerous bombs which will ruin your entire game. Players cannot miss more than three of the Pukiimon balls which will drag them to the end of the game in no time of they miss them. Pukiimon is an entertaining game with which you just play to the fullest contentment of your heart. This game can be downloaded from the App Store for just $0.99.