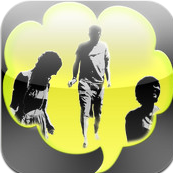 Many a times, I’ve seen posts from my friends on Facebook being screwed up. For example, there are many posts with quotes on love. I don’t know what that person thought of when posting that kind of status, but there are some truly hilarious comments and if there would have been a dislike button, then there was no counting of them as well. As a spectator, you might enjoy the show but the world is full of sensitive people and they might have their ego hurt in these cases. Also, let me tell you that the situation I just considered was really light hearted. Otherwise, there are far worse happenings possible. So there should be an alternate solution which can be enjoyed by everyone and here it is! Actually I’m talking about one of the latest iOS apps called meMessage. The app has been developed by S Jones. The app is compatible with iPhone, iPod touch and iPad and requires iOS 6.1 or any later version of the OS. The app has also been optimized for iPhone 5.

This new app is somewhat like a messanger but in a slightly different way. It’s a mixture of posts and social networking but it is definitely not Facebook. There are three different sections for you to check out. In the meMessage creator, you can create your posts and post them on their network for everyone to see. The post can be about anything you wish and can contain any kind of emotional as well as funny stuff. Then there is a random meMessage tab where you can check out the posts of other persons randomly one by one. There are two options: follow and next. If you like a certain post and wish to see more by that person, just start following him/her and you can find all his/her posts in the third i.e. followed meMessage area. If you didn’t liked the post, then just click next but keep in mind that you’ll never be able to check that message again by yourself because they all come randomly and with more and more users signing up, chances of repetition are very low. The UI is very simple and clean. There is not much stuff or any kind of extra glare to divert your mind. It’s a pure messaging app and that’s all. However, there are not much of the posting options and it’s more about simple text messaging. That limits this app a lot. Also, there are not many times when you would like to share a joke with some random public and end up with none of them following them. So though there is not any negative feedback, you get it indirectly.

In my opinion, the structure of the app needs to be improved. There is lack of social interaction and there is lack of proper stuffing as well. But the app is free and you can check it out in the App Store.

Cons: concept needs to be restructured.

Worth Having Application :  Try meMessage Today