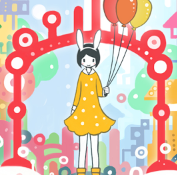 With Smartphone becoming the mini-world for you, it’s the home screen of your phone display that you see most in your day. Whether a new message comes, someone calls or you want to listen to the music, every time you reach the final station via your home screen. So if you’re watching something again and again, it must be something very creative and attractive so that you don’t get bored or start getting irritated after a few times. Previously there were plain wallpapers which no doubt were very beautiful depending upon the creativity of the photographer. But little later did us realized that they will not stay for long and people used to change them after a week or so. The slideshows which were like repeated cycles of pictures stayed for some time but soon were replaced by live wallpapers which completely changed the scenario and definition of wallpapers. Today we have one such live wallpaper in our review store. Let’s go see it then! It’s actually an Android app by the name Fancy Balloon. The app has been developed by DERMOND. The app is compatible with all the Android devices running Android 2.1.1 or any later version of the OS. It’s just 1.57MB in size and works with almost all devices in the present time.

The story of the wallpaper comes from a magical amusement park. If you’ve ever visited any amusement park before, then you can expect your memories to be re-portrayed on your phone display. It’s colorful scenery where you can find many giant ferris wheels in the background. In the middle, there is a cute little girl standing holding some balloons in her hands. Also, there are some more colorful balloons flying around here and there and serve as the source of only interaction possible with this live wallpaper. Talking about the graphics, I think there is nothing bad with it. There are beautiful colors sprinkled over an amazing scene of an amusement park. But still there are lots of other things missing. First, there is only one source of interaction and they are the balloons. Other than that, there is nothing moving in the whole wallpaper. This puts the wallpaper on the background because you can find many other types of wallpaper which offer great source of entertainment and glamour. Then the wallpaper is way too much feminine. Talking about the guys, they can’t afford to put such wallpaper on their phone’s home screen. Though for the girls, it’s one of the best choices available in the market, especially the little cute ones.

The wallpaper is available for free in the Google’s Play Store. Though it’s good to be put in the market, there are still many flaws as I mentioned above which the developer should work on and come out with a better product next time. As an advice, download the wallpaper and if it doesn’t fit on you, just change it.

Cons: other than balloons, everything rest is still; way too much feminine.