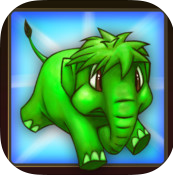 Wild Rush is a running and obstacles avoidance game created by ZilliarInc. If you like Temple Run or Subway Surfers, you can try this game out.  The story of the game is about the animals being held captive in the zoo. One day, the gate of the cage was opened accidentally and the animal tries to escape to the forest while the guard is chasing them. When you first start the game, you play as the tiger cub called Tiggy. There are other animals you can play as in the game such as the elephant, fox, rhino, hippo, hippopotamus, ostrich but each character will cost you 5,000 coins.

You can collect coins on the roadwith your animal by playing the game over and over again. The game has a mini shop where you can buy accessories for your animal to look cool. The accessories include sun glasses, shoes or hats and can be purchased using 1,000 coins. The game is packed with gorgeous graphics and nice sound effects. The user interface of the game is simple and easy to use. There is no tilt control in this game. This game is based solely on gestures. If you want your animal to change direction when they run, you just need to do a double swipe on your touchscreen. I realized there are hits and misses when playing this game. Usually, I will hit into the vehicles while collecting coins. The player must instill a sense of alertness within themselves to see which obstacles are near to them before they react. If the reaction comes in late, the animal will hit into the vehicles or obstacles on the road and they will be captured by the guard. Some of the obstacles include puddles of water and box crates. The game also lets the gamer view the animal running in a two dimensional view besides having a single top-down view. The game tries to motivate the gamers by allowing them to post their high scores through Facebook. There is also an achievement section where players can feel gratified when they complete certain achievements.

In my opinion, this game has polished graphics and nice sound effects. However, the game lacks additional controls option where the gamer can try out different controls tofurther improve their scores. This game can still be played on a bus or train when you are bored and have nothing to do.