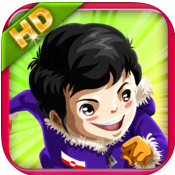 I’ve never been into skiing but watching them glide over the thin sheet of ice with breath-taking speed, i wish i was there. There is always a risk of falling off the bent-up edges or under the breaks and this risk is what drives me to go for it. But for the meantime when I know that I cannot go to Arctic or some place as cold as good for skiing, I want to live the adventure at my home. So here’s this new iOS app called Ice Gold Run. Though the app is not about skiing but running, still it gives you enough chills to get up out of your bed and look for the next obstacle. So if you’re bored enough at home to try something new, slip in your running winter shoes and get out! Ice Gold Run has been developed by Ulrik Motzfeldt. The app is compatible with iPhone, iPod touch and iPad and requires iOS 5.0 or any later version of the OS. The app has also been optimized for iPhone 5. It’s a running adventure over the white snow in a freezing climate. So it’s better to gear up for the sizzling cold show.

You are playing the role of Eskimeo who is in hunt of gold coins in the mountains of Greenland. As you collect 60 coins, the level will rise up one step ahead. As the level rises up, your speed will increase and it’ll become to more difficult to handle yourself. Moreover, there will be numerous hurdles in your way like arctic cliffs that you’ll have to jump off from time to time while there will be other arctic creatures to slow you down and imbalance you. You have to avoid them and collect as many coins as you can. So it’s more about collecting coins than just running madly. The race will continue until and unless you die. In the time trial mode, you are running against time and have to travel as far as you can and collect maximum number of coins. There is a multiplayer mode available as well where you can connect with other players using Nextpeer. Racing is always better and more suspenseful when there’s an opponent. So you can just expect the level of excitement you’re going to have.

Talking about the graphics and the overall gaming experience, I think it’s a mixture of several previous games like Temple Run, Mario, Subway Surfers, etc with a final touch of Ice Gold Run itself. The graphics are amazing and with the multiplayer option right there, I think this game will last over months on your phone. There is endless fun and the more you run, the better you score.

The app is available for free in the App Store. So go for it now!

Cons: concept seems to be a mixture of several old games.