Flame Painter ipad – Show How To Play with Fire 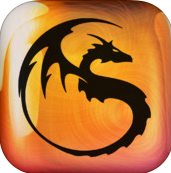 If I’m audible to all of you out there, then here’s my question: Which is the best painting app available in the market? While some of you will say Flame Painter available for the Mac, there will be many more supporters for Ember available for Mac. The choice is obvious as Ember is late entry in the market and has many more features than Flame Painter to boast for, but it’s also true that both these apps have a price tag that all of us can’t afford to buy. Also, both these apps are available for Mac only and that leave us with nothing for iPad. It would have been a lot better if we could enjoy the same functionality and features on iPad and enjoy the same treat on a smaller plate. I think that my wish has been granted as one of these apps is now iPad compatible as well. Which one? Read on. I am talking about the latest iOS app called Flame Painter for iPad (now you know which one) that has been developed by Escape Motions. The app is compatible with iPad only and requires iOS 6.1 or any later version of the OS.

If you ever had the chance to try your hands on the Mac version of Flame Painter, then you must remember the taste as well. But when you’re looking at the iPad version of the same app, you can’t expect the same finishing again, can you? Well, in this case, I think you can except a few features. I’ll come back to them later; let’s first talk about the things you’ll find. It’s an app to show your creativity and you’ll find the same flame artwork present in the original app here as well. Take any brush or create your own with some simple customizations and start painting. The flame effects make a simple painting look amazing in its own way. You can start your painting from scratch or you can take any photo from your gallery and start mixing different colours and gradients. But a good painter is never born without its appreciators doing their job. So go on and share your artworks with your friends via social networking websites or mail them if you want to keep it personal.

The UI of the app has been adapted to the iPad version as well because the one for Mac would not have been a good choice due to smaller screen and touch-screen controls available here. So you have slider controls included and less space is occupied by the buttons to give you the maximum space. There are a few things missing from this app that you would find in the Mac version. First, you can’t change the resolution of your canvas which is somewhat adjustable to the fact that you’re working on a smaller screen. But the zoom control is also missing which is a must for a painting app, especially one which you expect to be used by professionals as well.

The app is available for free though there is a paid version with full-fledged features available as well. You can definitely count on this app to work for you and your children. Try the free version and if you like it, go for the paid version as well.

Cons: resolution of canvas not adjustable; zoom button not available.