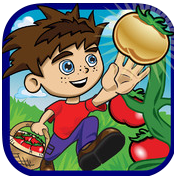 No doubt that Heinz is the world leader when it comes to dealing with a great tast of tomato ketchup. But have you ever thought of making your own cup of tomato ketchup with some juicy red tomatoes? Wouldn’t it be amazing to serve your guests with homemade ketchup and showing off your skills at the table? The main ingredient, as we all know, is tomato. But what if you run out of the juicy fruit? That’s what has happened with Jimmy who is a great admirer of the tomato ketchup and likes to make his own at home. But has just realized that there are no tomatoes left for him to use and that’s when he decides to go on an adventure which is the ultimate quest of “tomatoes”. So will you help him to find the red colour of his life and quench his thirst for the great saucy taste? I am talking about the latest iOS app called Tomato Tycoon that has been developed by Kickstartnews. The app is compatible with iPhone, iPod touch and iPhone and requires iOS 5.0 or any later version of the OS. The app has also been optimized for iPhone 5.

Tomato Tycoon is an arcade game where you are playing the role of a boy called Jimmy and your mission is to collect as many tomatoes as possible and especially the golden tomatoes. But your journey is not that simple. You have to avoid all the different obstacles in your way like birds and side by side keep collecting those tomatoes. Also, make sure you don’t take any of those rotten tomatoes by mistake. The more levels you complete, the more points you get and you can unlock new mini games which are 4 in total. Also, there are 7 cool avatars that you can unlock and my favourite was Pirate Jimmy, though Ninja Jimmy was also great. There are total 64 levels and it’s absolutely a treat to play. The hand eye coordination is a must and you should be quick enough to keep dribbling in between the obstacles as if Ronaldo is dribbling a ball past a defender. The gameplay is awesome and a certain kind of risky feeling always resides in your mind if you’ll survive or not. The graphics are neat and a good job has been done by the developers.  All the characters have been very delightfully crafted into reality and you should really proud on yourself when you unlock a new character. Adding, the quirky sounds played in the background are really funny and the young children will like it a lot.

Overall, Tomato Tycoon is a very well balanced game. It’s fun, entertainment and education as well. Did I forget to tell you about the tomato facts played in between the games? They help you gain some useful information about the fruit.

The app is available for free in the App Store. However, you can buy tomatoes via in-app purchase. So go try it now!