Chase your Mission in Helidroid 3D 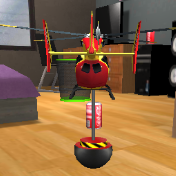 Mission based games are always loved by game lovers and changing mission with each level as you progress brings in a kind of enthusiasm that is not available in monotonous action games. This is what makes Helidroid 3D wonderful, which is a 3D game and comprises of a lot of mission. As the name suggests the game moves about 3 helicopters and mission with them. It is a new game for the android users and the missions in the game are really quite interesting. Helidroid 3D, by MH production, is a game played in a scene where a house is located in the middle of city with huts as well as skyscrapers. You will be getting the view of the house, the swimming pool and the helipads and the missions will revolve around it. The tutorial of the game is great enough to teach you how to control the helicopter, so don’t skip it before you move ahead. There are several missions in the game. For example, it will ask you to blow out candles by flying over them, pass through several rings and land on the mat. It may ask you to demolish the house of cards, escort the electrician train and many more. The missions will become more complicated as you progress in the game. The game is a free one to download and there is no in app purchase. Summary: Helidroid 3D is a game which involves a lot of skills to be applied. There are a total of 18 levels in the game which you will have to cross with your skill.

Good: The graphics is quite interesting in the game.

Bad: Acquiring the right skill is a bit difficult.