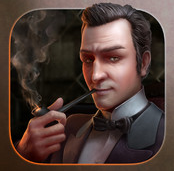 Mysteries have always enthralled the human mind since time immemorial. It has been explored by all forms of media till data- ranging from TV to books to radio to movies and more. The tales of Sherlock Holmes by Sir Arthur Conan Doyle are amongst those that never age in its genre. It has defined the thought process of tackling mysteries. These stories have now been transformed into an interesting iOS app SHERLOCK: Interactive Adventure. These books have been brought to life through this app. The app has a strong underlying concept and has an excellent design strategy. A lot of attention has been paid to detailing the scene.  It revolves around the story of the Red-Headed League. The whole story has been illustrated and includes interactive animations to involve the readers better. They can explore the rooms and characters in the story. There are maps to guide you around the place.

The most exciting and engaging part of this iOS app is the extent to which it involves the reader. The users are allowed to explore the locality and collect clues or hints too. There is a search mode tool to help the user find clues and relevant articles. The entire adventure is centered around the user and his abilities. If you are used to being read aloud stories, then there is an audio-recording of the book by Simon Vance as part of the full version. Besides that, there are dossiers for the central characters, periodic articles and music themes.

The layout and appearance of this app is commendable indeed. The illustrations are descriptive and well created. Although the pictures have a cartoon touch to them, they still focus on the essential data. It is different from reading an e-book but also fulfils that function at the same time. The navigation between various elements of the app is very simple too. For other options, there are large icons so that the story text remains the prime focus of the app at the end of the day. So, the design is like that of a traditional book but with an interactive and creative touch added to it.

The dossiers and the maps add a unique dimension of interactivity to this app. The dossiers are concise information about the characters of the story. The maps have a feel of what London would have been like back then in the 19th century. The story itself has bee excellently put across by Sir Arthur Conan Doyle and the interactive elements of this app give it a more natural and comprehensive touch. There are background sound and music effects suited to each scene for extra effects. The layout of the app gives the feel of reading an old library book with illustrations indeed.

Although the app is claimed to be free, the basic free version has only a part of the entire story. To get the rest, one has to purchase the app at a cost of $2.99, which is a little expensive for an app. The interactive element added enhances the works of Sherlock Holmes and does so well otherwise.

Good: Layout of the app, maps

Bad: The free version does not have the complete story