Save the World with Super Space Boy 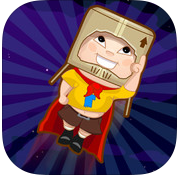 Sometimes simple games with simple objectives are more interesting than complicated ones. Some of these games are such that the kids will enjoy and will be able to play and adults will bring out the real fun out of the game. There are some such games on iTunes but most of them are paid ones. Here comes a free game on iTunes which will provide as much entertainment as you would have wanted. The colorful world of Super Space Boy is here to entertain you. He is in a super space mission in the game through which he has to save the world. Super Space Boy, a game by Craig Lauderdale, is a new game in the iTunes store where the hero fights against the enemies who are about to take away all the happiness out of the world. You have to make sure that super boy bounces on the balloons not allowing the balloons to deflate. The game is quite simple but it comes with multiple objectives. The game needs you to concentrate on it and with the new version there are so many improvements that make the game error free. There are several levels in the game and the difficulty is going to increase with each of the level. Summary: Super Space Boy is a game that is fun to play and good to enjoy with kids. The game requires you to be first and concentrated throughout. Here you will be bouncing on the balloons and stop the opponents from coming into the world. It is a colorful game that is going to be enjoyed by all.

Good: There are multiple objectives in a single game.

Bad: The game has been loved by all and there are no complaints.