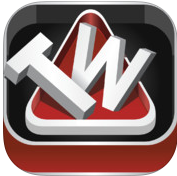 Word games are considered the best tool to learn a language. Scrabble is considered one of the most popular of such games that have been appreciated and loved world widely. But when one game becomes popular, there are hundreds of games that follow it. But today we have a game that is similar in the concept but completely different when it comes to the gameplay. So are you ready to learn some new words!

I am talking about the latest iOS app called Triwordz that has been developed by Alan London. The app is compatible with iPhone, iPod touch and iPad and requires iOS 4.0 or any later version of the OS. The app has also been optimized for iPhone 5. Triwordz is a very interesting word game that consists of many different parts in gameplay. On the game board, there are 180 triangles in total (half right-side-up and half upside down) and 88 letters that are to be used turn by turn. At the start of the game, you’ll be given two letters and you have to place one of them in any of the triangles. After each turn, you’ll be given a letter randomly. Using these letters, you have to create words in the horizontal direction without any spaces and that as well using the triangles pointing in the same direction. For your pleasure, there are some letters that are bi-directional and can be used in any direction: H, I, N, O, S, X and Z.

The game is multiplayer and you can challenge anybody and start playing. Once you play your move, notification will automatically be sent to the other player for his turn. So you can play as many games as you want at the same time. When you create a word, you’ll get as many points as the number of letters in that word. But there is a twist in the tale. Apart from the main word you make, if there are any sub-words in the same, you’ll get points for them as well. So if you create “time”, you’ll get points for “time” as well as “me”. So don’t just focus on creating a big word, find the hidden words in between so that you can score more. The game continues until all the letters are used and the person who scores more wins the game. The graphics of the game are good and you can easily distinguish your word from the surrounding words due to different colours. Apart from that, there is nothing much you can add to the graphics. The user interface is also intuitive and easy to understand.

Overall, I would rate this game as one of the best word games you can find. It’s not only about creating words, but choosing a smart one that will garner you more points. The app is available for free in the App Store. So make sure you get your hands on it!