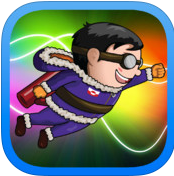 Ever enjoyed the thrill of going to the top of a cliff and looking straight at its feet standing at its top? Ever gone for a night out in a camp in the middle of the jungle without knowing anything about it? It’s a world full of possibilities and I don’t think we’ve tried even half of them. Maybe because all those possibilities don’t have that perfect end that you dream of. But still, the world is full of adventure lovers who are willing to go beyond the extremes. Four such enthusiastic kids, with their thirsty hearts and minds open for anything unusual, end up at a cave that they had never seen before. If you’re searching for a well in the middle of a desert and find one, what will you do? The same was their feeling when they found the cave. So they went in to explore! All these four kids are part of an iOS app called Flying Eskimeo that has been developed by Ulrik Motzfeldt. The app is compatible with iPhone, iPod touch and iPad and requires iOS 4.3 or any later version of the OS. This app has also been optimized for iPhone 5. Flying Eskimeo depicts the journey of these four kids as they fly their way through the cave. You must be thinking how these toddlers started flying. Actually, they all have jetpacks of their own. So why eat the tasteless food when you have all the spices in your bag! The cave is all covered with grass and as you go inside, you’ll find a lot of coins spread throughout the cave. You have to collect all those coins so that you can upgrade your resources such as your jetpack to a powerful one. Even you can buy the shield power so that you stay protected from any kind of harm. Of course, what’s an adventure without dangers and our little heroes are well aware of it. If you get hit to the Arctic wall, you’ll die; so maintain a good difference from them. But there are some other walls that you have to keep breaking and make sure you don’t leave a single bone of them intact.

The game is a nice combination of fast gameplay and some amazing graphics. From the interior designing of the arctic cave to the characterization of the four characters, it’s an outstanding piece of work by the developers. You can choose any of the four characters and enjoy the chilling beauty of this in these shiny sunny days. There is not a single aspect about this game that didn’t go well with me. Obviously, it’s mostly for children but adults can enjoy a piece of it as well. So just grab your iPhones and start a new journey of your career!

The app is available for free in the App Store. However, to remove the ads you need $1.99 in your pocket.