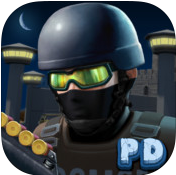 Prison Defense, an iOS app, is a well-planned strategy game that follows up from Plants vs. Zombies, replacing them with police and prisoners instead. You play the role of the police, keeping prisoners caged and preventing them from breaking free. All in all, there are 40 levels to the game, each with a similar setup. There are numerous cages that have been laid out on the floor. Players have to tap on each crate in order to unearth either a weapon or an enemy. The weapons uncovered can then be used against the prisoners by setting them up on one side of the floor. If you choose the right side of the floor, you can ward off the prisoners easily. A large part of the game is governed by a factor of luck. If you manage to keep going without uncovering any enemies and building up your defences against them with weapons, then success is a sure shot thing.

To add spice to the game, there are many types of enemies for you to battle against. These vary from the heavy tank types to the light damage ones. You hence have to decide your moves based on the kind of enemy you encounter. The variety isn’t all that great but it does help break the monotony of the game to a large extent. Since you do not know what awaits you at each stage, building a powerful strategy is the key to winning this game. Also, you are unaware of how many enemies are still in the cage, waiting to be discovered by you and to attack. The difficulty level increases with the increasing levels. The change in the level of difficulty as you proceed from level 1 to level 10 is quite sharp. As the new enemy types are constantly added, the game turns out to be more challenging and harder. Speed and acuteness of mind are almost like prerequisites for the game. If you happen to place a single weapon in the wrong row, you could lose the entire game.

To make things more manageable, the game comes in three difficulty levels: normal, hard and plus. In the normal mode, the characters are much slower and the progress of the game is quite sluggish too. In the plus mode, the scenario is much better. Twists are added to the game in the form of time limits, fast forward and the like to make the game more interesting. This is among the challenging and fun modes of the game. In the hard mode, the enemies are much stronger and the speed is much higher.

In an attempt to make the game more challenging, the developers have placed TNT underneath some crates as well. However, this does not produce the desired effect as this TNT does not do any harm to your prisoners but can be fatal to your characters. Since the crates are randomly arranged, a single one of these crates can ruin your entire strategy at times.

The game poses a good challenge to players, turning out to be addictive after a short while. A good strategy and a stroke of good luck is the only way to win this game. The app is available for free on the App Store for iPads with iOS 6.0 or higher.

Bad: Gets repetitive and boring after a few levels.