Glidefire – A World Beyond Imagination ! 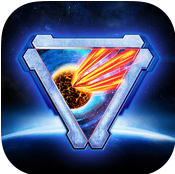 The sci-fi movies that we see today are most of the times set in the future backdrop i.e. around 200-300 years later than our time. Some of the numerous examples can be Avatar, After Earth and the most famous of them all, Star Wars. Most of these movies have been successful but not all of them and there is a reason for that. When you ask people to believe you that this is the future of our world, you need to build it like that. The speed at which the advancement of technology is taking place right now has shaved off all the boundaries of our imagination and that’s why it becomes a whole lot of difficult to go surprise them. It’s like a dream world where anything is possible and those who succeed to grant that wish of the audience, taste victory. But what is this all about? Well, we have a new app in the App Store called Glidefire and it belongs to the same genre. The app has been developed by Wonderwood Games and is compatible with iPhone, iPod touch and iPad and requires iOS 6.0 or any later version of the OS. This app has also been optimized for iPhone 5.

It’s a game of endless fun and at first, I thought of it as a sci-fi version of Temple Run but it’s completely different. Yes, you’re constantly running for your life but it’s just a part of the picture and not the whole of it. You’re playing the role of an Arbiter, a retired pilot who has been asked by the Earth Alliance to go and check what’s going on in the battlefield which has been overtaken by Drones. You are a part of a team and all of you have been equipped with high-speed Gliders which are really some of the coolest and muscular machines you might have ever seen on the screen. As a part of the gameplay, you have to escape from obstacles but at the same time fight with your enemies as well. So you need a combination of speed, armour and artillery to fight them and if it’s not enough for you, their bosses are waiting for you. Each such battle will get you some money and you’ll have to use that money wisely. Invest it in your gliders and upgrade them with better weapons or buy a new one with better design and speed.

What can I say about the graphics; astonishing, thrilling or phenomenal. Choose whichever word matches nearest to mind-boggling! Yes, this is going to be a ride of your life. It’s like a roller-coaster ride in the space without a track. You’re going up and down and the world around you is brighter than a star. You should watch it yourself and then tell me your experience.

Overall, this is one of the best games for you to try out. You can challenge your friends as well and the online Leader board will always keep pushing you. So what the hell are you waiting for!

The app is available for free in the App Store.