Baseball Kings- Let out the sports buff in you 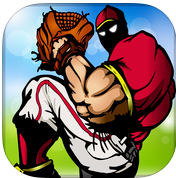 Are you too caught up in life to make time for sports? Were you once a sports champion who has lost touch with games? If yes, then APPNORI has something for you. You can now get back to sports on your iOS device with Baseball Kings, a pitching simulator. Time for you to become the King of Closers again.

Begin your career in baseball with the level of a Rookie. As you continue playing, you can progress to the Major League and further to the Division and then all the way to the World Series. Once you begin, it is almost impossible to stop till you climb up the entire ladder to the World Series. All you have to do is ensure that your team remains in its best shape and progresses upwards rapidly. The gameplay is indeed very different and fascinating. To pitch the ball, you have to place your finger on it and then flick it forward. If you want impressive throws, you could opt for a fireball power-up. Also be careful not to throw wild pitches, lest you may be giving a run away. With realistic simulations of bunts, strikeouts, pitches, double plays and more, the game keeps you addicted for longer than you can imagine. Added to this, the short game[lay sessions are meant for those who like baseball and are running short on time. If you are new to the game of baseball but are too scared to make a fool of yourself on field, then you can first give it a shot off field with this iOS app. The game begins with a tutorial that guides you about all you need to know to play the game. Once you have mastered the game on the app, you can be a lot more confident and walk into the field. The user interface and effects of the game are worth a mention. To begin with, you touch the Play button on the home screen. Following this, you are asked to choose your team from a collection that includes Philadelphia, Chicago, Atlanta, etc. Once you select your team, you are taken through a tutorial that guides you through the instructions and rules. To simplify the game, the batsman enters the fieldand the bowler has to then slide the ball. If the batsman hits it, he scores. The more the times he hits, the higher his score. If he fails to hit, his opponent gets a point.

There are little details in the game which add to the realistic feel. There is a small arrow on the screen to control the ball speed, you have the option of fireballs, you can choose your own team, the character of the player can be changed and more. All moves have been simulated to perfection. Also, the atmosphere of the game adds to the sportive mood. The enthusiasm of the audience does catch on while playing. The score board also adds to the feel. To better your game, you can upgrade the team batting average, the team defence, the player’s character and even the average speed of the ball.

To sum everything up, Baseball Kings is an app simulator for the sports buff in you. Executed to perfection, it is a must download app.