Just Get 10 – Next Generation Puzzles ! 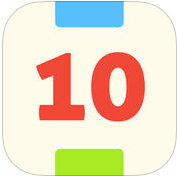 The ultimate number puzzle game is here now! The latest version of the popular match game Just Get 10 has been launched on iTunes. The latest version has even better visuals, sound effects and ensures to offer an experience that is addictive. This new numbers game play is simple, you only need to find out the same number amongst the colorful tiles that appear on your screen, and tap them to combine and grow. On a single tap on the adjacent tiles with the same number, they will pop up, and on a second tap they will be moved to the position you tap to; your objective is to make a 10 or even more. The game offers endless challenges and has a simple yet attractive front end, which is easy to play but difficult to master. The unique features that make the game perfect for the next generation are: Summary:veewo is Creator of 1024, and Just Get 10 is a number puzzle game from the same house; the new game even claims to be better than it. The latest version is free from any bug and can offer a splendid gaming experience. The game has simple operations but it offers endless challenges to master the game.

Good: The latest version of the game has no bugs and it is also available for free. In addition to that, the producer encourages any suggestive idea from the users to make this game even better. The game is often regarded as next generation 2048! So far, the game has received great reviews from the users.

Bad: No bad reports about the app have yet been received, so we can expect a complete entertainment from this app.