Hungry Hal: Time to bring the zombie to the undead 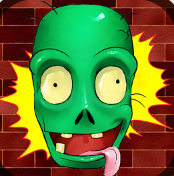 Zombies are known for their phenomenally slow speed and for being scary. They attack the living but are outlived on account of their sluggishness. In the Android app Hungry Hal, this is about to change. Hal has been affected by the walking dead, a virus that is infecting the zombies and catching on quickly. The impact is that he is now running fast instead of walking around slowly. He now has a thirst for human brains and is set out on a journey to satiate his undying hunger for them. Your aim is to help Hal get hold of as many brains as possible to keep him alive. He wishes to end his zombie life and become a normal human again. And this can happen only when he survives the virus. At the end of the game, he is resurrected as a human. You have to watch out for Hal’s brain meter, which will constantly indicate his current situation and tell you when he needs to get his next meal of brains in order to stay alive. He must return to the undead. As Hal runs in different direction, there are three paths that he can choose between. Swiping up and down will help him switch between them. Additionally, this helps him to get past obstacles and catch pedestrians as they run about. As you chase the helpless humans about, there is plenty of sadistic pleasure that you can derive from it. The fun comes into play when you begin gnawing on their brains and hear them scream and yelp about in pain. Watching them become your dinner is comical indeed. The Apocalypse has now begun.

The developers, ELF games, have put in a lot of efforts to make the infinite runner game addictive and fun. Everything from the presentation to the animation to the graphics will make you laugh from both within and without. A touch of cartoon style and a variety of cool sounds have been added to the character Hal as well as the background so as to lighten the mood of the game. The final execution and performance of the game is indeed commendable.

Another quick fun feature is the upgrades. To implement them, you have to collect bones along your way and spend these collected bones to add variety to your gameplay. There are a lot of goodies up for grabs varying from a magnet to collect bones easily to a scooter to run down people at high speeds to a ‘Gold Brain’ to add to Hal’s life and much more. Each of them is humorous and casual in its own way. The key to winning the game is to keep an eye on all the three paths and choose between them quickly and efficiently. Your ultimate goal is to ensure that his brain meter does not run out. The minute it does, your game is then over. There are three different difficulty levels to choose between. With Game Center support, it is easier than ever to keep track of your high scores and see where you stand among friends. To top it all, the app is available for free in the Play Store.

Good: Touch of humour with sounds, graphics and upgrades