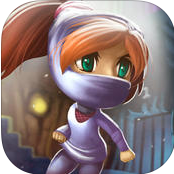 You know what a glitch is? It’s a temporary error or something that’s been created by mistake but will soon vanish to nothing. So it’s like bacteria whose existence doesn’t matter at all. I heard this term for the first time when I watched the movie Wrecking Ralph and that movie turned a glitch into a hero. But I didn’t know that this concept can be turned in another way as well. We’re talking about a Pandora who is up for an escape through a futuristic jail. This little Pandora must survive every hurdle in her path to glory. But there’s something mysterious about the world she’s a part of. Or should I say that this Pandora has some mysterious power which will turn all the stones upside down once unravelled! Well, we have only one choice and that’s to find out ourselves. I am talking about the latest iOS app called Shadow Glitch 2 that has been developed by Appdore. The app is compatible with iPhone, iPod touch and iPad and requires iOS 6.0 or any later version of the OS. This app has also been optimized for iPhone 5, iPhone 6 and iPhone 6 Plus. I must say that Shadow Glitch 2 is really a challenging game. You’re on a mission to clear more than 100 floors but each floor is like fitted with hundreds of obstacles that will get you all tired up. But ninjas aren’t made to tire up in the middle of a challenge without completing it, are they? So you must continue the journey but keep your eyes restricted to your phone screen. If they’re distracted for a second here or there, you’ll have to get back from where you started.

There are two phases in Shadow Glitch 2: shadow and glitch. In the shadow mode, Pandora has to avoid all the dark objects including the coloured objects. So it means that you can run past every light object just like they’re transparent to it. In the glitch mode, it’s vice-versa. But when you play this game real-time, it gets a lot tougher than you think. There are some fixed obstacles and then there come bullets moving towards you. And there are bullets of both colours: black and white. So while you pass through one, you have to avoid the next one and you must act quickly. You get confused between black and white and it’s like you’re playing in binary language of 0 and 1. But at the end of the day, you’ll truly enjoy this game. It’s like an addiction that will seep deep inside your blood and you won’t be able to get it out at any cost. And what’s the cost of this addiction? Well, it’s absolutely free and that’s a good reason to get addicted. Don’t you think?

The graphics are amazing and the soundtrack is very intense, just like the gameplay. There are different colours in the background at different floors but what one should be worried about is the combination of black and white. The animations are really smooth and flawless just like molten butter on a pan. So what are you waiting for? Just grab your phone and download this game today.