Solitaire Arena: A New Twist to the Old Tale 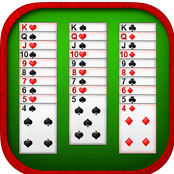 A pack of well arranged cards is shuffled and every time, a new combination is unpacked out of the deck. That’s how a game of solitaire starts. Now you have to arrange them back to where it all started, just like the big-bang theory where we’re tracing our own footsteps back to the origin of the world. But there is something very unique about each and every game played here. Even if the first few cards are similar, having a same pattern throughout is just like finding a second Earth in this universe which our scientists can tell you more about how rare it is. But even if there’s a new puzzle each time in front of you, as the game proceeds, they all finally lead to the same road and there’s still a long journey to go. So it gets boring in the end and I hate that feeling. Want to change that? Well, if you want to bring a new excitement to this traditional game, let’s call upon stage the new iOS app called Solitaire Arena that has been developed by MavenHut Ltd. The app is compatible with iPhone, iPod touch and iPad and requires iOS 6.0 or any later version of the OS. This app has also been optimized for iPhone 5. At Solitaire Arena, you can play against another player one-on-one in real time. It’s the same set of cards for both of you. So you both are playing the same game but separately. You can anytime see the top foundations of your opponent as well to determine what exactly your position in the match is. So the game which had a very bad habit of losing the excitement in its later half now plots a new graph and stays constant all throughout the match. You’re now time bounded and your game automatically picks up pace.

Apart from one-on-one games, there are tournaments that you can be a part of. This is actually a Facebook game and there are more than 4 million registered players there. So there are more than enough active players for you to compete with. You can connect with your Facebook account and get to see the avatars of your opponents. But you don’t have to invite any of your friends for that and that’s a big relief. Though this game adds a new twist of multiplayer gaming, you can still play it solo. But there are some modern spices added to it as well. For example, now if you’re stuck in a game, you can use a Magic power up which takes out that one card from the hidden cards which is required for you to continue the game. The rest of the game is unchanged and therefore, you’re saved from restarting another game just for the sake of that one card.

The game also makes it easy to play the game on a small screen. For that, now you don’t have to drag and drop each card. You just click the card you want to move and it will automatically go to the right place. But in case you’re not satisfied, you can drop & drop it yourself as well. The graphics are sharp and the cards are clear to be identified without a microscope.

So overall, this is a very good app that all of you must download. Check it out today in the App Store. It’s available for free.