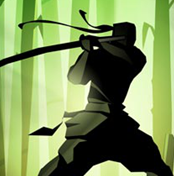 Japanese, Korean and Chinese movies have always been appreciated for their fight sequences. It’s still a single hero versus the chunk of villains, but the villains here are more than just puppets. They know how to fight and until and unless the hero beats them, even their act of ‘villain’ism can’t be ignored. They’re so quick that sometimes you have to slow down the speed of the movie so that you can count exactly how many times the hero has hit the villain. It’s like a machine gun that the hero has triggered and now he himself can’t control it. Their fights are a combination of many different art forms such as Kung Fu, Karate and Martial Arts. But learning each such art form takes years of practice and if you want to be featured as the hero in those movies, let’s replace it with decades. But now you have a chance to be one of them right here at Shadow Fight 2. Shadow Fight 2 is a Windows App that has been developed by Nekki. The app is compatible with all the devices running Windows Phone 8 and 8.1.

Shadow Fight 2, which has already smashed many Facebook records with 40million users is now about to do the same on Windows Phone. The game is a mix of RPG and classic fight just like the ones you’ve grown up watching. The biggest positive of this game is the real-like fighting scenes. When you’re in a combat, you’re in a very different world and there are 6 of them that you have to go through. Your opponents, as I told you about those movies, are better than you in many terms. You can watch your life decaying to death at the top like a candy in your mouth. So if you don’t give your best, you’re sure to lose the match. All the fighting moves are neat and executed with perfection. The high-end graphics support them beautifully so that you can watch the fighters building up their final attack in steps. You’re trying to catch the gaze of your opponent’s eyes to pick his next move. How ankles twist, the muscles start swelling up and a rage becomes your expression is a story before ever attack of yours. The shadow art hides every detail of the fighters but highlights what’s desired. Then to top it off, there are many weapons that you can use. They’re deadly and dangerous but as long as you can put them to your use, there only meaning is life to you.

Without any doubt, Shadow Fight 2 is one of the best fight games. The controls are intuitive, the shadow-art graphics blend smoothly with the amazing animations and the gameplay is too irresistible to put down. It has got everything that you can possibly ask for and what’s that all for; completely free. Yes, the game’s available for free in the Windows Store. So let’s get started!