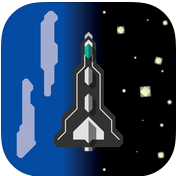 Sky is not as clear as it seems to be. What we see in the night is just a group of stars that “shine like a diamond” but actually there are many more alien objects in the same atmosphere that don’t shine and therefore are not visible to us. They are called asteroids which are big rocks that keep flying in the atmosphere at super-sonic speeds and if you’re watched the movie “Gravity”, you’d know what I’m talking about. Sometimes these asteroids are directed towards our planet Earth and looking at their size, giving them entry can prove a fatal decision. So to make sure that we don’t have to encounter such difficulties, a space-rocket has been designed called Stroid and its only aim is to destroy all such flying hazards such as asteroids, bubbles and shattering crystals of the nearby and distant planets. Guess who’d be driving it! I am talking about the latest iOS app called Stroid that has been developed by Matthew Sawrey. The app is compatible with iPhone, iPod touch and iPad and requires iOS 7.1 or any later version of the OS. This app has also been optimized for iPhone 5, iPhone 6 and iPhone 6 Plus. Stroid starts off a very high-note as you’re suddenly exposed to a road that is all blocked by big rocks and looking at the speed you’re going through, you’re in a big trouble. But thankfully, you have got the weapons to clear the road by yourself. But still, you must choose your path carefully through these obstacles or you’ll soon be a question of history. The controls are very simple as you just have to tilt the device to move the rocket left or right and tap your thumb to shoot. On your way, apart from destroying the foreign matter, you also have to collect ores that’ll help you get power ups and advance to the next levels of adventure.

The game has its stations on 6 different planets including our planet Earth. So it’s going to be a universal mission and it’s big, very big! By the time you reach the next planet, you must be exhausted and so must be your space-rocket. But don’t worry as you have three different variants to choose from and they can be upgraded from time to time for better performance. But you’ll have to unlock them yourself. Though every effort has been made to keep the game as simple as possible, the graphics have certainly been designed with a different mind-set. I mean they’re amazing and the colour spectrum has been put to good use. Many different elements have been added to create a space that’s both complex in structure and intense in design. The soundtrack also blends highly with the gameplay.

So overall, I would say that Stroid is an amazing game and you should certainly buy it. It’s available for $1.99 in the App Store. So make sure you grab it today.