INERTIX – A FICTIONAL MYSTERY WITH A ‘SCIENTIFIC’ KEY 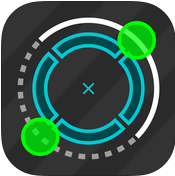 What do you know about inertia other than the definition of Newton’s first law of motion? We all know that it’s the tendency of a body to continue its motion in the same state even if it’s applied a force in the opposite direction. But there’s much more to it. Have you ever tried to solve a puzzle that is entirely based upon that theory of inertia! We all encounter countless number of examples or should I say situations in our daily life where inertia plays a part. But it’s always random and most of the times you just can’t do anything. When the bus stops suddenly and you fall onto the next person standing to you, what could you have done to prevent it? I would say nothing. But here’s a situation where everything’s arranged to get messy and you know it. So just drop in, get your hands dirty and see if you can stop the chaos! I am talking about the latest iOS app called Inertix that has been developed by Razvan Andrei. The app is compatible with iPhone, iPod touch and iPad and requires iOS 7.0 or any later version of the OS. This app has also been optimized for iPhone 5, iPhone 6 and iPhone 6 Plus.

Inertix is a very challenging game which involves a lot of strategy-making and timing is most important asset in this puzzle. Just like moon orbits around the earth or more precisely, electrons orbit around the nucleus of an atom, here we have some orbiting particles around the cores. These orbiting particles are first attached randomly to dissimilar coloured cores and your job is to match each such particle to its matching core. A tap on the screen will detach all the particles at the same time and they’ll start moving in a straight line until they hit another core. So if you finally manage to match all the particles with their orbits, you win or you know the result otherwise. But there’s a twist and that’s a very risky one. The outer layer of the core consists of two parts: one solid and one dashed. If the particle hits the solid part, it gets attached to the core but if it hits the dashed part, it gets absorbed and if it isn’t a matching combination, you lose the game straightaway. But if you’re thinking it’s a hit-and-trial run, forget it because it’s not. More the number of balls you have, the difficult it becomes to control them. So try to absorb as much balls as possible, of course with the matching cores and only then can you hope to complete the level. The graphics of the game are highly-finished and polished like a gem. The colours are vibrant and just from the first look of the game; you can see that it’s something decent you’re holding in your hands. The cores and the particles have been designed very well and the overall animations and layout seems pretty impressive and high-tech, just like it sounds.

I would say that this is a very decent app that you must download. More new levels are coming out soon. There are no in-app purchases or any ads. The app costs just $0.99. So go and grab it today!