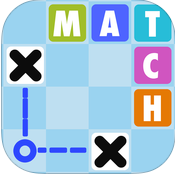 For the gamers who love to put their puzzle solving skills to test and thus enhance it steadily, X-Match is a perfect match. The thrill of first moving arcade games are unbound no doubt, but as you keep on playing them, you are sure to lose interest. This is where the X-Match scores full point. This puzzle solving game claims to offer an unbound entertainment that is always challenging, and you can never get bored of. The game has a completely new strategy and it does not matter how many puzzle games you have played before, the X-Match is sure to be a completely unique experience for every player. In the first 2 weeks of its release, the web version of the game has been played for over 7k times by gamers across 20 countries of the world; and most notably, without any marketing effort from the developer. The new version of the game to be played on mobile devices is now available on iTunes for free of cost. This highly innovative puzzle game becomes highly addictive as well as challenging as the player keeps on making fresh attempts. Every player can formulate their own winning strategies to put a world record, which is currently at 403Xs for Standard Mode. Yes, there are more than one modes of the game, and players can enjoy this truly innovative puzzle for months without losing interest. The game comes with a neat and clean appearance which is simple to interact and understand. The graphical presentations are of high quality and highly color saturated which offers a nice visual experience. Like most of the other puzzle games, the gameplay is simple; but unlike the other puzzles, these simple steps become challenging as one keeps on playing. The game shows grids, some of which are empty and some are filled with numbers. The player need to tap on an empty grid between the two same numbered tiles to merge them and create the sum of the two numbers. The app comes with detailed instructions on how to play and one can grab its detail gameplay quite easily.

The game is also accompanied with interesting sound effects which adds to the overall gaming experience. The latest version of the game which has been released on 6th of February,2015 has an improved layout and some bugs of the previous version have been fixed in this edition. This puzzle game developed by LiqingPan, needs iOS 5.1 or later to run and is compatible with iPad, iPod and iPhone. This application is optimized for iPhone 5 and takes 13 MB space on the memory drive of the device.

This app does not add to the existing parade of mobile puzzle games, rather has something unique to offer to the users. The game is playable through different platforms including your mobile and computer and hence can be enjoyed from anywhere at any time.

No bad report about this app has yet been received from the users, and it is most expected that this improvised version of X-Match is free from bugs.