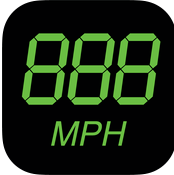 What would have happened if you didn’t had a speedometer in your vehicle? Well one thing is for sure that you’d soon be running over speed and a police car would have been following you. But the economical impact of losing a speedometer will be much more significant. For example, if there are three different routes to your office and want to track the shortest as well as the least time-taking route, you need a speedometer. Moreover, suppose one route is shorter than others but is full of traffic and ditches giving you a low mileage overall and increase your cost of fuel, it doesn’t serve your purpose and again, you need a speedometer to track your daily consumption. In general, if you can track your runs and routes whether you’re on a vehicle or walking down a lane or moving up/down the stairs, it’s always a plus. Don’t you think! Speed Pro+ is the latest iOS app that has been developed by Mother Tucker. The app is compatible with iPhone, iPod touch and iPad and requires iOS 7.0 or any later version of the OS. This app has also been optimized for iPhone 5, iPhone 6 and iPhone 6 Plus. As you open this app, you’d be greeted by a very refined and easy-to-use interface where you just have to tap the start button and it will start tracking your run. Now whether you’re jogging in a park or running vigorously to lose weight before your marriage anniversary, you get a full-fledged data analysis of your entire run. It shows you the average speed of your run, the top speed you managed to attain as well as the route you had taken. So if there are two different circuits in a park and you don’t know their actual measure, this is a good way to compare them. Moreover, if you’re climbing stairs in-between, then you’ll get an exact record of them as well. So the results will summarise your whole journey into a short-sweet screenshot which you can share with your friends and even boast your newly-attained fluidic body with pictures and videos. The in-built camera features allow you easily capture some good shots even when you’re not in the best pose possible. When tracking the run, you can pause/resume anytime during your short breaks. You can also trim off the unwanted sections of your saved tracks. There’s nothing more satisfying than watching your stats improve because they never lie and reflect your changes in the most genuine form. There are many different themes available with different colours, just adding a new dimension of aesthetics value to that rigid app.

So I would say that if you’re a regular runner or just want to track you run to see your current stats, go for Speed Pro+. It’s available for just $1.99 in the App Store.