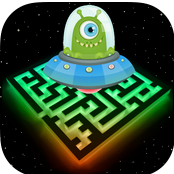 How difficult is it to find a good quality game on the App Store? Well, the answer matters upon your choice. If you’re a sci-fi kid with a very big appetite for action and adventure, then there are many good options available and most of them are available at the top lists of most popular lists. So you can easily end up with a crack in your spine while playing them endlessly. But now let’s talk about the other crop; those who want to have some plain fun and enjoy the game thoroughly without penetrating too much inside the virtual world and staying superficial. It’s always a tough task for these people to find a good match; it’s almost like looking for the right key in a bunch of similar keys and though they might all appear the same, in the end there’s only one perfect combination. But not anymore! I’m saying it so confidently because a new iOS app called Evade Maze has recently been released in the App Store and holds a lot of promise on its sleeves. The app has been developed by Comis d.o.o. and is compatible with iPhone, iPod touch and iPad and requires iOS 8.0 or any later version of the OS. This app has also been optimized for iPhone 5. This is an endless game and while this is almost a cliché format nowadays with almost every new game opting it as its skin, there’s a lot to say that hasn’t been attempted before in the same way. The game slowly starts getting you inside and within a matter of seconds; you’re all covered up inside a hollow balloon with nowhere to escape from and nowhere to hide. Your mission is to keep all the obstacles at arm’s length and manage to avoid them as long as possible. But as you’ll find out, the number keeps getting more and more and soon you’ll be crowded by a herd of beasts. So the plot of life against time decreases exponentially and finally comes to rest; you can only affect the degree to which you can resist the ultimate death. While the gameplay is addictive, enjoyable and pure, the graphics enhance and add to the overall experience. They’ve been designed in accordance with the theme of the gameplay and given some light brushes of colour and glitter. As you’re playing the role of an alien in the outer atmosphere, it covers the hole of ‘excitement’ in the overall display value. So overall you’re treated with a well-drawn painting that you can understand and cherish while you play one of its leading characters.

So the overall game plan has worked perfectly well for Evade Maze and if you want to get a bite of its taste, you don’t need to anything. You don’t even have to spend a penny out of your pocket as the app’s available for free in the App Store. So let’s get rolling!