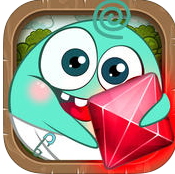 If you like match -3 puzzle games, then Giddy Gem Crushers is the new puzzle game that is taking the iTunes app store by a storm. The exciting game allows you to play against your friends to see who is the best on match-3 puzzle games.

The Giddy Gem crushers is a match 3 puzzle game that lets you real time match 3 puzzle game against other expert gamers. The game comes in two different game modes. The “Story Mode” and the “Arena Mode”. The story mode is a single player option which lets you enjoy the game on your own. The Arena mode on the other hand is a multiplayer mode that lets you compete against other real time players in order to determine who is the best in the Giddy Ville folks arena. Features of the game. 7.Achievements- You can easily view your achievements displayed on your scorecard.

This game is very exciting. The real time arena makes it even more realistic. You have to battle it out against other experienced games so as to secure your place in the global leaders board. Since this game has over 100 unique levels, 3 different characters and four different maps, you will never run out of playing options.

The game is available on the iTunes store. You can download it on your IOS device and start enjoying the exciting features today.