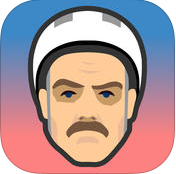 Well one must admit that no matter how big a tech-freak you are, there are so many things on internet that you’re certainly going to miss one or the other. Today we’re talking about a flash game that has recently opened its doors for iOS users. With over 1 billion online users, the game was an immense success at the web portal. But unlike them, there was still a small section including me that didn’t even get the smell of the fire. So for people like us, here’s a gift by the developer of Happy Wheels! Many of you would’ve played this game before; many of you haven’t. Happy Wheels has been developed by Jim Bonacci. The app is compatible with iPhone, iPod touch and iPad and requires iOS 6.0 or any later version of the OS. This app has also been optimized for iPhone 5. Now let me get straight into the application. This is a physics-synchronized challenge where at each level you have to cross and avoid several hurdles and objects to finally be able to reach the exit door. But these hurdles are not limited to just poking in your feet or straining your ankle with a jerk; they’re far more fatal. In fact, just a minor mistake, a small-timing error in your jump and you can run straight into your death-bed. Moreover, the developers leave no stone unturned when it comes to creating a gory scene; a scene of bloodshed when your skinny-figure comes under a moving beam or gets crushed between the roof and the upcoming slide. So better harden your heart before you step in. Though the flash version of the app has many different avatars and vehicles, here to start with we have a business guy riding a personal transporter. Many more variants are on the way. The game has 15 levels. Though the number sounds to be diminishing at first, when you face-off the challenge, you’d know that this is just a myth. The game is fast-paced and therefore you must show some quick moves or you’d have to restart again!

Graphics of Happy Wheels are simply amazing. They are neither too fancy neither too dull but just fine. The colours are soothing and delightful. The animations just take this game to another level. They’re smooth and fluid; you can almost feel a breeze on your cheeks when you’re riding on the transporter. The gameplay is totally addictive and even after several failed attempts; you’d still be starting with the same hope and passion.

So overall, Happy Wheels is one game that you can’t afford to miss. The game is super-amazing and there’s a lot more content that’ll be added in the near future. There’s even a provision to create your own levels. So do you think you’ve got the architect in you?

The app is available for free in the App Store. So what are you waiting for?