Arranged Marriage- Running away from the evils of Indian society 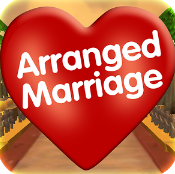 Junglee Games has recently released a new Android app called ‘Arranged Marriage’. This game is focused around escaping from an arranged marriage by running away from it. You have a number of fun adventures such as riding a horse and outrunning your fiancée along the way too! Everything from running to sliding to jumping to evading is part of the plan. On the way, there are power ups to keep you going and keep you inspired too! The idea of the game is quite simple. We all make mistakes in life. Agreeing to an arranged marriage can be one of the biggest ones we ever make in our lives. This game gives you adequate practice to handle this. There are lots of times when we differ from our parents on the choice of the right girl for us. We love someone else and they decide to give our lives another direction altogether. This game starts once you decide to run away from home with your girlfriend. You begin running with her while she takes the avatar of a bride. The main problem is that you are running on the streets of India and hence can expect an array of unexpected obstacles along your path. These range from cows to autos to pillars to children to vendors and more. And they are scattered all over the place. To make the game more interesting, one of the biggest obstacles is in the form of ‘Dowry’. This adds a social aspect and significance to the game. It’s quite an innovative way of spreading the message! The app developers have added a fun aspect to the social issue of Arranged marriage through this game. They have handled it quite delicately, adding a layer of humour and gamification to keep the audience engaged. There are a number of evil social practices looked into by this game. The developers believe that marriage is a sacred union of two people and both parties must agree to it happily. Forced arranged marriages can result in havocs in later life. As is depicted in the app game.

This game is an endless runner game with controls similar to Temple Run. After a few minutes into the game is where all the difference sets in. Any Indian can connect to it and get the real feel of the game as part of the culture. The atmosphere of the country is what adds the spice to the game. The horse power up and running away in front of your to-be spouse adds a fun and sarcastic touch to the game.

Besides the concept itself, there is an online leader board to look out for. Getting your name in there is a huge achievement. This app can be downloaded for free from the Play Store. It requires Android 2.3 or higher versions and 26 MB of free memory space on your device. There is a number of in-app purchases that can help you fare better in the game and achieve a higher score.