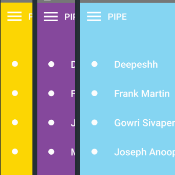 Text messages have been a part of our lives since long now. The format of messaging has also changed over all these years. Earlier we started with pagers, then SMS became prominent and now chat messengers are leading the row. Messages have transformed into conversations now and while they were an alternative to calling before, now calling is the secondary option in sight. But still, the basic module of messaging has remained intact. We use the same word-language in our texts and there has been no considerable improvement over it. We have invented some of our own shortcuts, but they’re very limited in use. Right now, we’re using messaging in the same sort of calling with words being written. There’s a need to change the overall structure of messaging and bring the original purpose onboard: to cut it short. Do you know how to do it? Well, if you don’t know, then don’t bother. I’ve got something interesting for you. It’s called Pipe Micro Messenger App that has been developed by Hashpolls. The app is compatible with all the devices running Android 4.0.3 or any later version of the OS.

Pipe Micro Messenger has invented a new concept called “Dot Messaging”. Dots are meant to replace the obvious. For example, many times when you reach back home after watching a movie late night, you call back your boyfriend or give him a miss call or send him a message “I’ve reached home”. Now, you can replace all of them with just a “.”. You got it right! This dot is your answer that what was decided has been done. So if you want to tell a person that you’ve arrived at the station, just dot him. There are also many abbreviations to choose from to quickly respond. The concept of the app saves you the trouble of answering with a whole line when it’s not needed at all. But as you’d have pointed out by now, it comes to your rescue only when things are planned. What if they don’t go the same way? Then you have an option to send a custom “normal” text message. So you’re always playing it safe.

But the developers have gone a step further and converted this messenger into a micro-platform where you get many great deals, offers and even job opportunities and guess how you get them; they dot you. So you can subscribe to a US education program and when they have seats available, you’ll receive a dot. It’s as simple as that! Sign up for a job at an MNC and when an opening comes, you’ll get the dot. The design of the app is simple but elegant with many different themes available to choose from. The interface is intuitive and easy to pick up. You can send dots to multiple users at the same time. So the app sticks to its formula for a quick messenger.

Overall, I’d say that Pipe Micro Messenger App is a bold new messenger that you must check out!

The app is available for free in the Play Store.