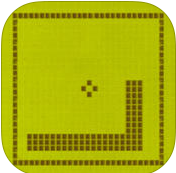 If you’re in your thirties or even twenties right now, then all of you must have played the classic Snake. The game which first came in 1997 was nothing less than a craze at the time when Nokia handsets used to rule the world. The situation has changed now and the biggest handset company has now been merged into Microsoft, but the memories of those old days are still fresh. Have you ever thought of giving that classic game another try? But now when we’re all carrying Smartphone in our hands, how’s that possible? Of course, you won’t be reverting back to the same old handsets for a game. So why don’t bring that game to your phone. Yes, you’ve guessed it right. Snake is live on App Store and we’re going to find out if it’s really worth the retro-tour or just a modern day flashback! I’m talking about the latest iOS app called Snake ’97 that has been developed by dsd 164. The app is compatible with iPhone, iPod touch and iPad and requires iOS 7.0 or any later version of the OS.  Get Snake ’97: retro phone classic on poki

Snake ’97 does it all to make sure your old-school feelings stay intact. The developers have tried to keep it as close to the reality as possible and that’s why they have allowed you to pick your own handset from the many choices available. So if you had a Nokia 3310, it’s in the stock. Other choices are 5110, 3210, 8210 and 8850. So when you tap the play button, you’re no more playing the game on your Smartphone but you’re playing it on your old handset with the same buttons. Now this is called a nostalgic moment! There are two games: snake 1 and classic snake 2 with 12 difficulty levels in total. The controls are the same with the same dot-matrix graphics and even the same original monotone sounds have been used. No doubt that the game is very addictive and equally challenging once you plug-in the right difficulty level. Mastering the game would be quite difficult, but yes there are many different templates that you can try the game with that will keep things interesting. For example, in some levels you have puzzles while in some you can go through walls. There are even bonus creatures. Again, the developers have kept the original stuff intact but added some of their own. So they’re giving you the same old chocolate ice-cream with some extra cherries on the top. Snake ’97, overall, is fun, addictive, challenging and yes, nostalgic. And since it’s a memory of many, it’s available in many different languages. So what are you waiting for? Download the app now and start Snaking. But do remember that you can’t reset your high score. So do take it seriously right from the start or you’d have to shy it away from your friends.

Another added note, the game is completely free!

Worth Having App – Download on App store –  Snake ’97 on Poki