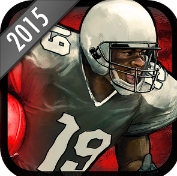 Is Football your cup of coffee? If you wish to show off your knowledge about the sport, you should try out ‘Ted Ginn: Kick Return Football’, an Android app developed by DoubleTap Software. This game is ideal for football lovers who would like to show how much they love the game.

This game is based on the career of Ted Ginn Jr., a player in the NFL. He is known for making his mark in the sport by occupying the 9th rank in the receiving category and the 13th rank in the kick returns category. The aim of the game is simple. You have to first decide a route that your player will take across the field. Then you have to wait till your player gets the ball and picks it up. Once the ball is in his hands, you have to guide your player down the field. In this app, you get started as a fictional football player and a part of the blocking crew. You keep playing games and earning yourself victories while playing against the most well-known teams. As you make your mark, you will earn coins. Once you have enough coins, you can play the role of Ted Ginn Jr. The best way to go about the whole process is to look for gaps in the defence of your opponents. Following this, you have to follow block, break tackles and tip-toe down the side-lines to make your presence felt in the field. Get return man 3 on Poki.com

The part of this game that makes it stand out is the easy and intuitive controls. The touch controls are so simple that you can pick them up in a matter of seconds. The flow of the gameplay is quite basic and addictive. You get started as a nobody and get started by playing in tournaments. Initially, the rewards are low. As you climb up the ladder and win matches against the tougher teams, the prizes increase. You can upgrade your player by upgrading your uniforms, blockers, returners and much more. You also get good practice of real football strategies through this game. Your ultimate goal is to match the skills of Ted Ginn and take his place in the tournaments. Ted Ginn: Kick Return Football is an exciting game for anyone who loves football. Irrespective of whether you’re a newbie or an experienced player, this game is full of surprises and lots of fun. If you are stuck at any point, there are lots of in-app purchases to help you out. You can buy these for real money to get help with the game.

This Android app is compatible with all Android devices with Android 2.3.3 or higher versions. The easy controls and engaging gameplay will have you addicted in no time at all. To show off your skills, you can share video replays with your friends. To improve your own skills, you can watch the videos posted by others and learn from them. All said and done, this game is ideal for anyone who is a football fan.