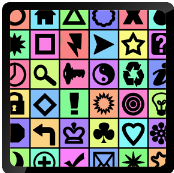 Logic games are a great way to keep your mind sharp. They help you focus better, enabling you to improve your capacity for learning and information retention. The problem is finding the right one that will challenge you enough and keep you addicted at the same time. This is where 90 different logic games comes into the picture. This app has such a huge collection of logic games that you can be assured that you will never get bored. Another great aspect of the game is that it covers all the different areas if focus with its collection of games. This app is available for free download from the Play Store. All you need is an Android device with Android 3.0 or higher versions. When you download the app, the home screen can be a bit confusing. There are a couple of game icons at the bottom that look like buttons. At the top, there are buttons with stars, where the stars represent the difficulty level of the game. Each of the difficulty levels have 900 different levels under them. You get started by picking out the difficulty level and then getting started with the games. Each level is a different game that conforms to the difficulty level.

One of the downsides of the games is that there are no instructions to guide the player. It’s really left to them to figure out the puzzles. There are hints in each level that you can avail of if you happen to have hit a dead end. The first few levels are quite simple and ease you into the mood of the game. The levels get harder as you progress. Also, players cannot select the puzzles that they wish to play. This can be quite disheartening for many. While the logic puzzles are great, the developers do not seem to have put much thought into developing the interface. Although it is understandable that graphics are not the focus of the logic games, the ones in this app are really primeval. There are no instructions or guidelines whatsoever, which can tend to be a bit confusing. A little bit of thought into the graphics would have been a neat touch to the app. Also, there are absolutely no sounds in the game. While this again is not a necessity, sounds can be a nice touch when used in the right places. This game is purely a test of logic without good graphics or sound or the choice to pick which puzzles you wish to play. Besides these little faults, it is great for those who like challenges.