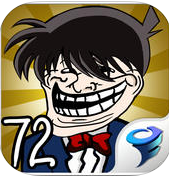 Troll Face Quest is an iPhone game app that seems to have generated a lot of varied opinions amongst those who have had the chance to play it. Some seem to play it well without any issues and call it a “great” game, but others seem to have no clue of how the game is played and sadly the game is still too fresh to have a cheat sheet. Though in my opinion, having it easy or cheating takes away all the fun in playing such games. It is the complexity and challenges of the game that makes us fully appreciate playing it. play Troll Face Quest on poki for free. The newest version comes with an improved style, a chunk-load of surprises and more exciting levels all tailored to give players the best of the best gaming experience. That is usually a game developers dream and passion. They not only want to develop an amazing game, but also a game that is able to engage and entertain the players to their peak. The Game is all about a figure from “Go Ballistic Comics”. A very funny and weird looking figure. I say weird looking because of its very strange grin. It’s a bit ugly, but I assume it was just the developer’s way of imposing humor in the game. This Awful grin coupled with the figure’s vulgar laughter is bound to make u giggle a bit. In fact, most players, judging from their reviews, are profoundly awed by this. The figure is the hero of the game and is a little nasty, let’s just say the whole game is nasty. A little tip to all those who haven’t yet mastered the game, “Think Outside The Box”. You are bound to fail if you choose to play the game in your typical state mind.

The main challenge of the game is progressing to the next stage, hard as it is, it is possible all you have to do is believe in yourself and make well-thought moves. One wrong move could be the sole reason for not progressing to the next level. To tell you the truth it takes a Trollface genius to go through all the levels without failing, but as I said, “the sweetness is in failing then progressing”. Sure enough, with time cheat sheets shall be cooked up, which will eventually lead to the emergence of fake Trollface geniuses. The game comes with a number of amazing features like;
> It is simply touch controlled
> It has 30 awesomely difficult levels, all with varied pass methods
> It is completely free to download and use
> Very many varied results the are set to get you hooked on the game.
Yes, we all agree the game is difficult to make sense of once in a while, on the other hand, it’s occasionally epicly entertaining enough to make you disregard the trouble about the levels you have already played. The app is compartible with all iOS devices running on version 6.1 or later. Very much recommended for iPhone, iPad, and iPod touch users. Try it and see how much fun it can add to your day.